Orange Snow, Black Blizzard: All Just Dust in the Wind

Orange snow is not the result of eating too many Cheetos or drinking too much SunnyD.  Surprising, I know.  Instead, the answer my friend is blowing in the wind. All just dust in the wind. And for me, a bit of a blast from the past.

ORANGE SNOW? WHAT ARE YOU TALKING ABOUT?

If you have not heard, Russia, Bulgaria, Ukraine, Romania, Moldova, and possibly a few other countries along the way watched orange snow fall a few days ago.  Said one person on social media, “We’re skiing on Mars today.”

It isn’t all that uncommon in Europe. It’s the price of development and storms.  According to the BBC, this kind of thing happens about once every 5 years or so.

Winds sucked sand from the Sahara into the atmosphere, then blew it across the Mediterranean Sea to come down as snow and rain in Europe. 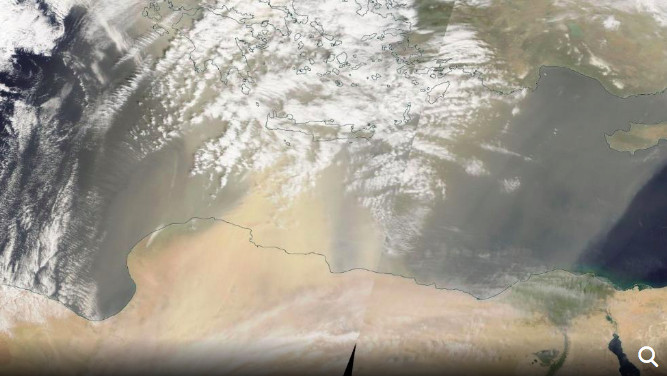 In the photo above, the dust storm, i.e. that tan smear, crosses from Northern Africa into Greece. It then moved into Eastern Europe.

Hence the orange snow.  Although some consider it red.  Crete and Turkey got haze and dust instead.  Actually, everyone got haze. See the photo below.  It’s like everything was doused in an orange filter. 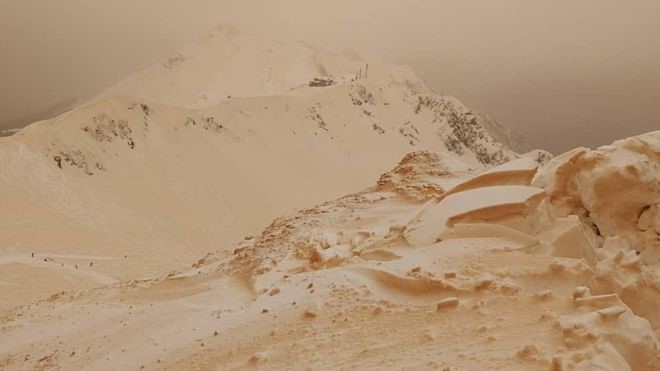 You know, it really does make me think of Mars. Photo by Margarita Alshina, via Associated Press.

Sand traveling across a thousand or more miles to snow down in strange colors.  Remembering the Sahara has expanded over time as a sand desert due, in no small part, to humans overtaxing the ecological system. This reminds me of something from America’s past.

BLACK BLIZZARDS SWEEPING ACROSS THE PLAINS

The Great Plains of the U.S. are designed to be prairie.  The nasty, prairie grasses and their intertwined roots help keep the topsoil down and nourished.  The grass was regularly churned up and fertilized by various animals, the chief among these being the great bison herds.

Then settlers came out to the Great Plains, and found that it yielded bumper crops of wheat, while others came to the West to hunt the bison herds almost to extinction.  Vast tracks of the Great Plains became devoted to farms. Which tore up the grasses meant to keep the prairie ecosystem together and replaced them with crops that were planted then mowed down. Leaving not much to replenish the soil or keep the top parts down.

Folks didn’t realize it, but the situation was ripe for disaster.  Starting in 1930 the area was hit with a series of droughts, which, by the way, can be driven and exacerbated by human overtaxing the system, as well.  By 1931, it was not just a matter of losing crops to lack of water.  When the wind swept across the plains, as it tends to do, it stripped the land of the topsoil.  The pattern continued for years.  We call the area of the time period the Dust Bowl.

This did not just destroy crops. It destroyed income, which in turn caused people to lose their land to the banks.  Keep in mind times were already difficult due to the Great Depression.

Worse yet, that dust went somewhere.  It buried farms and equipment.  It got into the lungs of livestock and people. And it killed them. 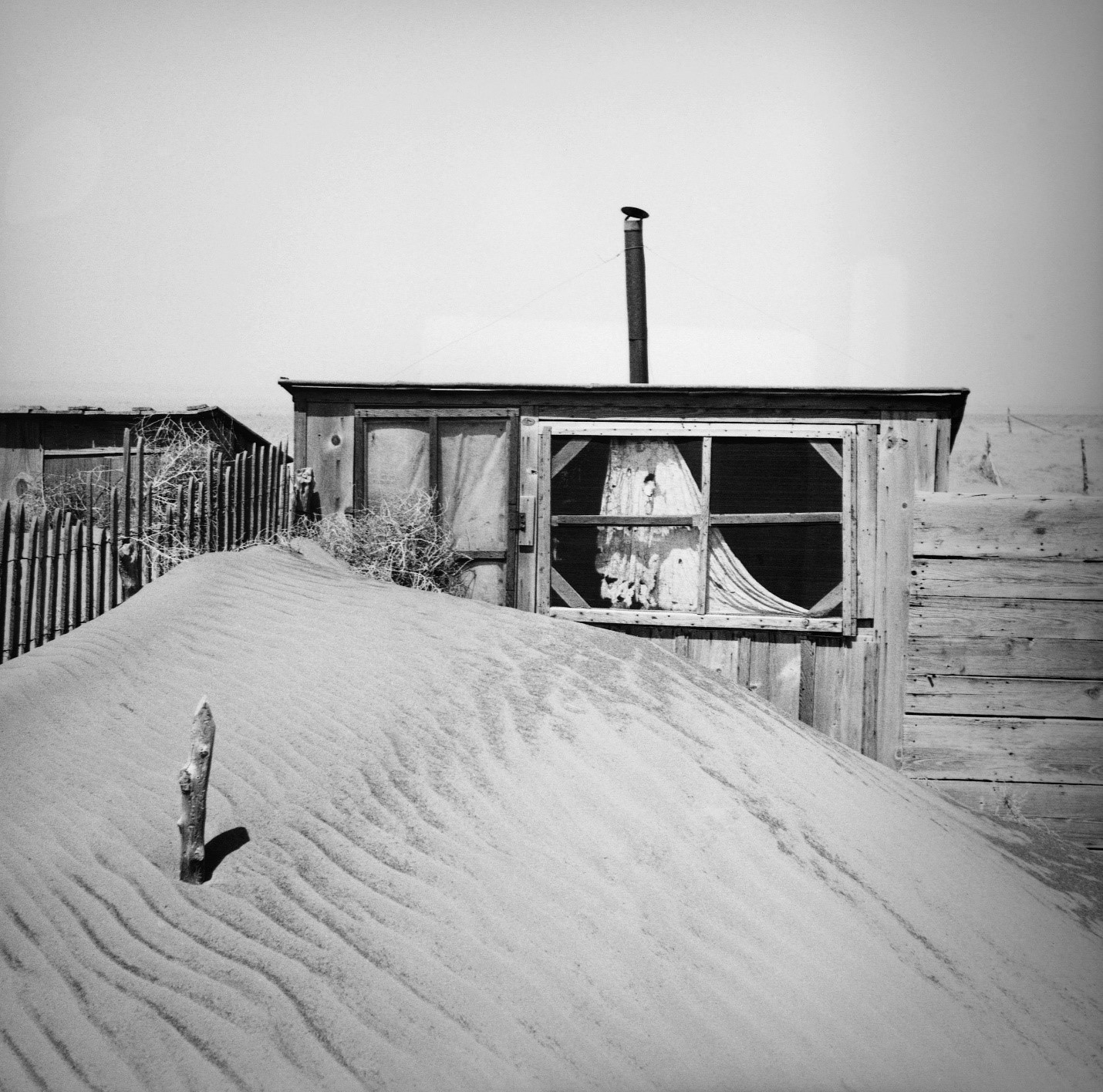 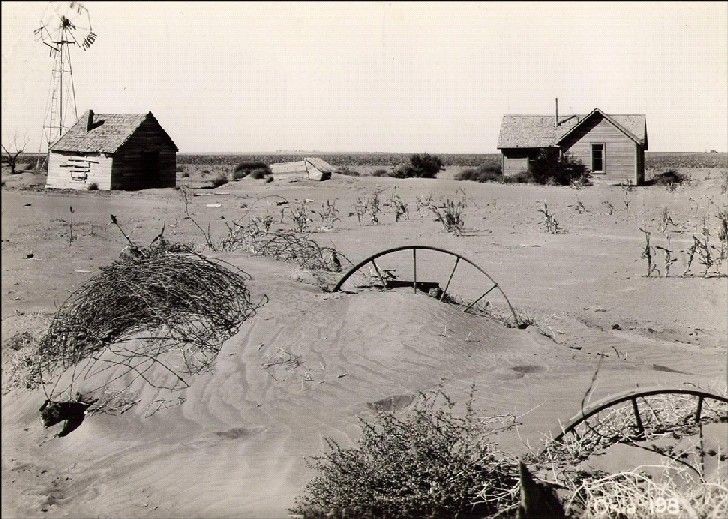 Buried farm and equipment in Oklahoma. 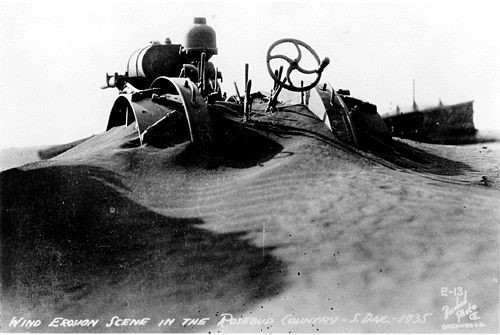 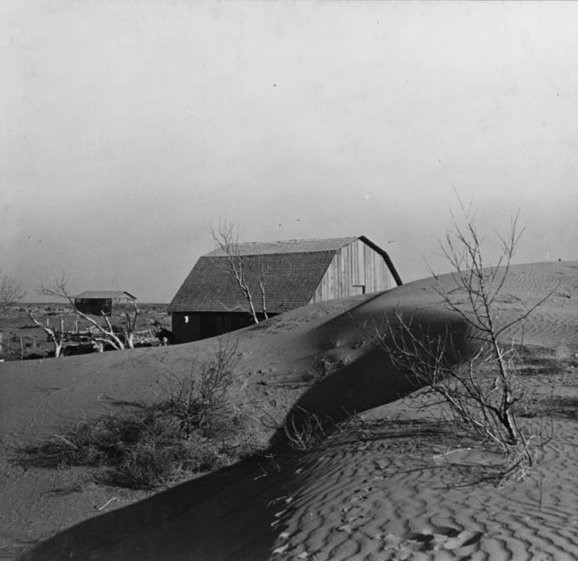 Drifts of soil in Kansas. Reminds you a little of the Sahara, doesn’t it?

Some of the dust storms generated during the Dust Bowl were particularly intense.  So much so that they blotted out all the light, turning day to night, and lifted soil hundreds of feet in the air to drive it hundreds of miles.  A black wall of dirt that engulfed everything. Black blizzards. 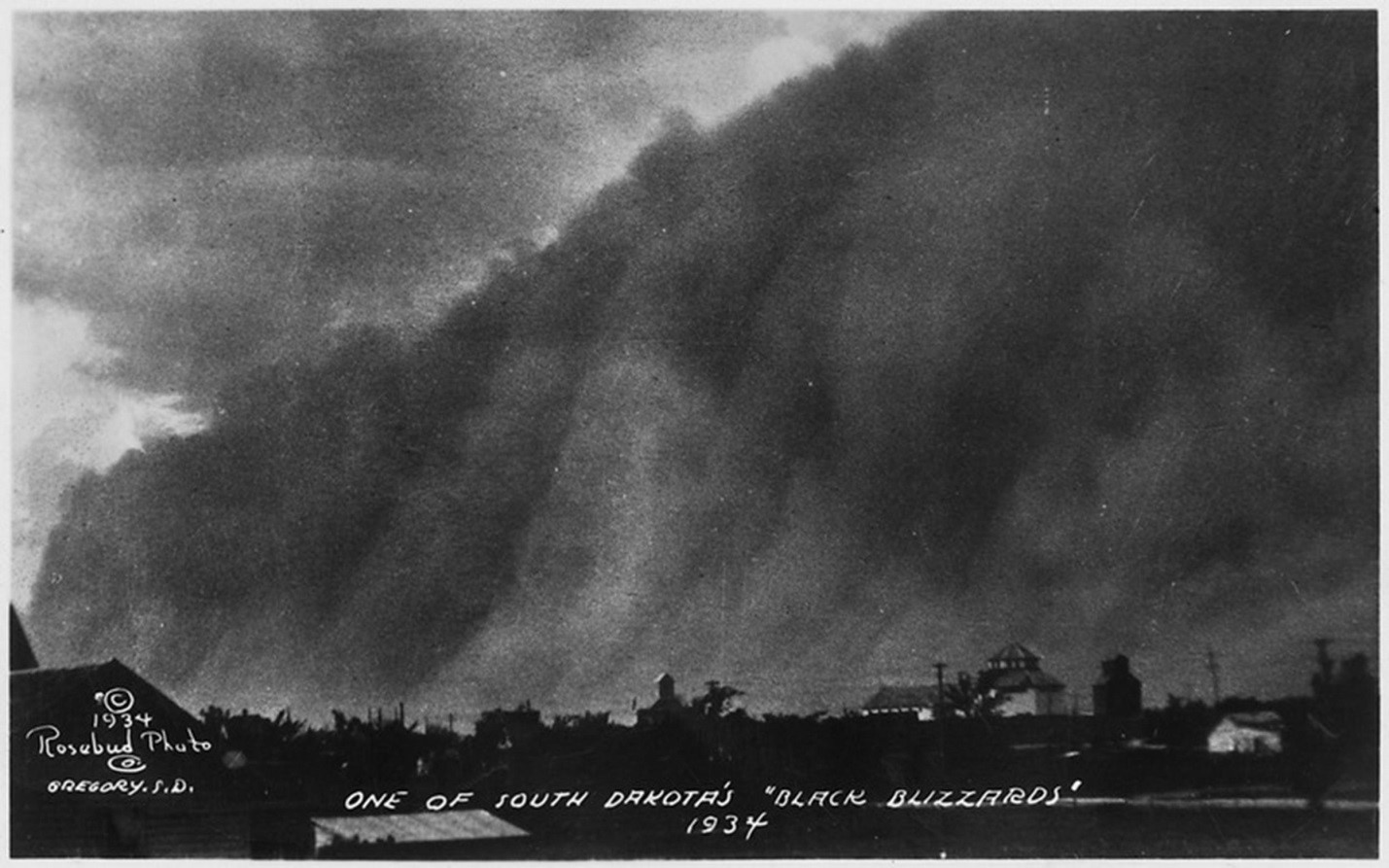 A black blizzard in South Dakota, 1934. That’s a giant wall of dust.

THE BLACK BLIZZARDS DID NOT STAY ON THE PLAINS

That’s impressive enough.  But sometimes those winds drove the dust much farther than just the Great Plains.

Black blizzards engulfed New York City, Boston, and Washington, DC in the Great Plains’ topsoil. Then moved on to dump the remaining in the Atlantic.  Ships at sea complained of having to remove huge layers of dirt from their ship decking. 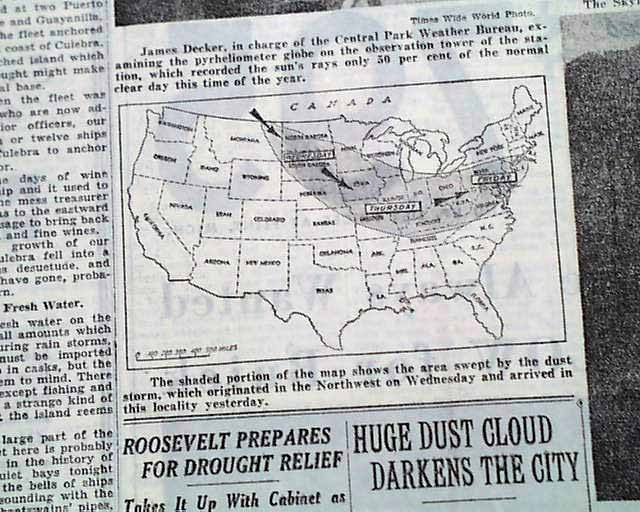 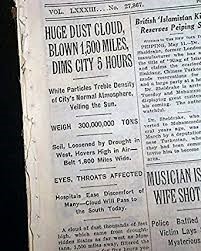 In case you can’t read the headlines from the photo: 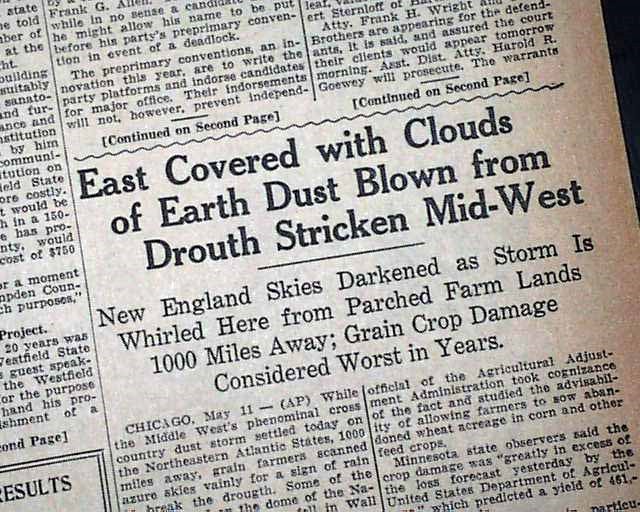 Article from the Springfield Union, Massachusetts, May 12, 1934. 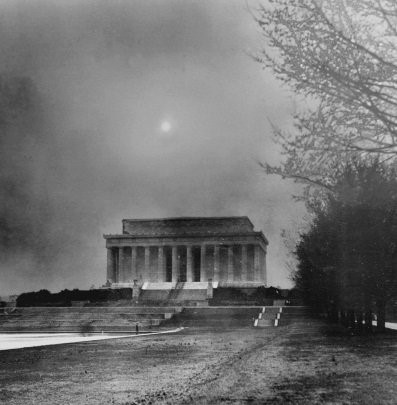 During the winter in Massachusetts, sometimes red snow fell.  Again, from the Great Plains soil. Just like orange snow in Sochi.

YET THE BLACK BLIZZARDS DID STOP

Eventually the Dust Bowl ceased to be a dust bowl.  Humans served a big role in the solutions, just as they had in the causes.

People recognized that land use was a big part of the problem.  By 1935, the federal government had established a division devoted to the problem of soil erosion. It developed programs to encourage conservation, including changing farming techniques.  Terracing, crop rotation, contour plowing, and cover crops served as weapons in the arsenal against the continued loss of topsoil.  The division paid farmers to implement the techniques.  The federal government also launched a tree planting campaign to further anchor the plains soil.

Such efforts faced an uphill climb.  The amount of damage already done was staggering.  By December 1935, experts estimated that 850,000,000 tons of topsoil from the southern plains had already blown away during the course of that year alone.   By the end of the 1930’s, many areas had seen  more than 75% of their topsoil carried away as dust in the wind.

However, eventually the conservation efforts began to pay dividends. By 1938, only three years after the government launched its efforts, these methods had already brought about a 65% reduction in the amount of soil erosion.  By 1939, rains began to return again, ending the drought.

The Dust Bowl finally came to an end, and with it, the Black Blizzards, leaving the area to dig out from the ecological, economic, and human disasters it left in its wake.

Why bring all this up?  I’m a fan of “Dust in the Wind” by Kansas.  I also just thought sharing a few historical tidbits may be of interest to some of you readers.  Any wider understanding of the Saharan phenomenon,  or anything else, that may result is an added bonus.