Remind Me Why We Even Need Security Clearances, Mr. Kushner

Oh heck no.  Today, White House Press Secretary Sarah Huckabee Sanders assured reporters that, regardless of whether Jared Kushner can get a permanent security clearance or not, he will continue to do the work he has been doing all along for the White House.  Which means that if Chief of Staff John Kelly’s Friday night memo is enacted, Kushner would be operating without any security clearance. And that’s A-Okay with the White House.

Take a moment. Let that sink in for a bit.  Then I’ll start to unpack some of this.

Since it’s the Olympics, take this interlude to “enjoy” the explosive nature of the Norwegian curling team’s pants. Yes, that’s part of an official team uniform. And that’s just one design among many in their collection. Don’t be too startled. They’re just pants. Very garish pants. 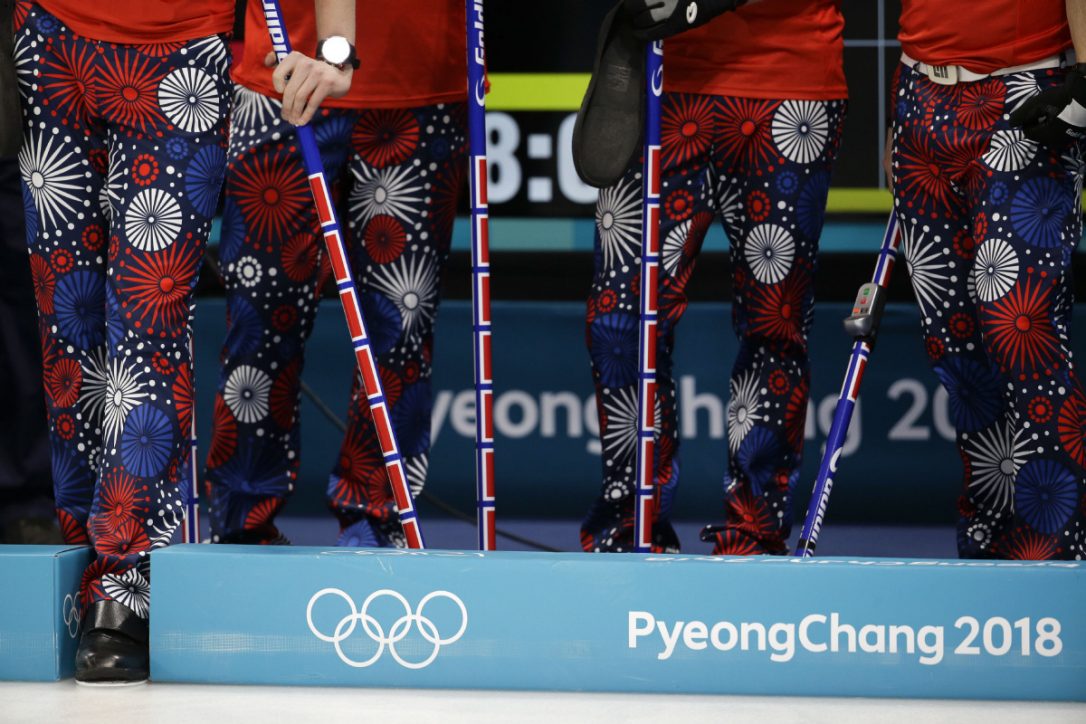 Okay, back to this blog.  Personally, I am more alarmed by what the White House said about Kushner than I am the eye-bleeding (but strangely compelling) patterns in Norwegian Olympic uniforms.

Let’s start with the groundwork.

WHATEVER KUSHNER IS DOING REQUIRES A SECURITY CLEARANCE

Back at the start of President Trump’s administration, he named his son-in-law, Jared Kushner as…Well, that’s part of the problem.  Innovations Director.  Assistant to the President. Senior Advisor to the President.  But no one seems to really have a hard definition on what any of that means.

Among the projects, or areas, Kushner supposedly works on for the White House:  Brokering peace between Israel and Palestine; deals with Saudi Arabia; relations with Mexico; deals with other foreign countries; improving governmental efforts regarding veterans’ affairs; improving information and technology contracting; the opioid crisis; criminal justice reform; and deals with defense contractors.

Has Kushner actually done work in all of those areas?  In most cases, who knows, outside of the White House.  Like I said, that’s the problem.  We don’t exactly know what he does, except that a lot of it seems to be high-level stuff. 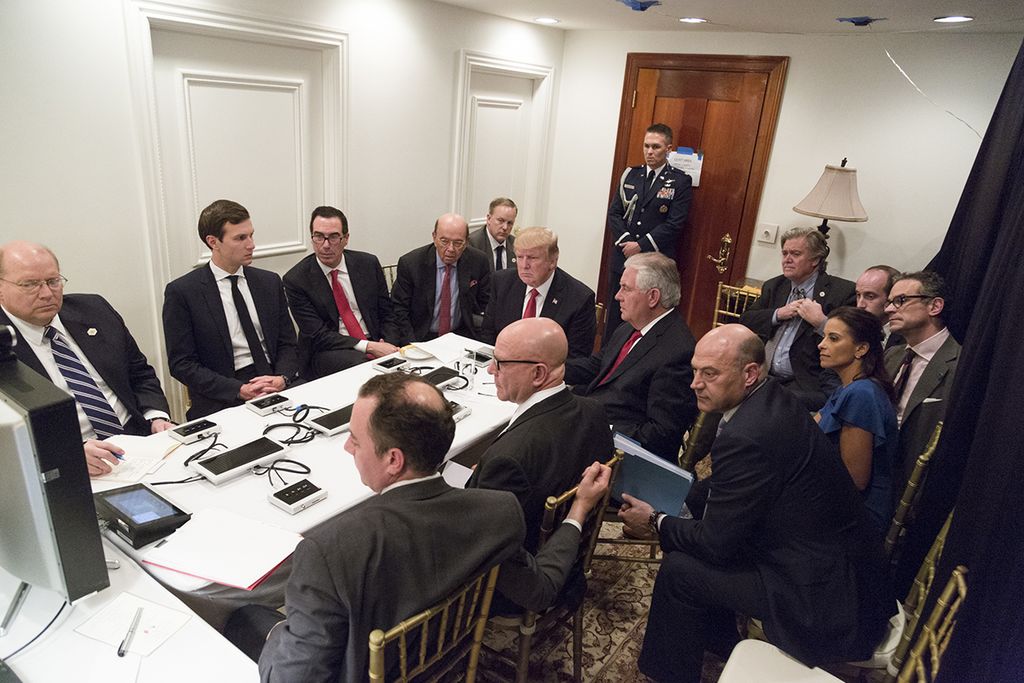 From the outset, Kushner has had issues with security and security clearance.  He worked for the Trump transition team alongside Michael Flynn, who has since pleaded guilty to lying to the FBI about Russian contacts during that time.

Kushner himself has had to update his disclosures regarding foreign contacts and financial information numerous times. Constantly adding additional information that should have been disclosed at the outset. He made his most recent financial updates in December 2017.  Check out this summary of some of those changing financial disclosures by the Mahablog.

Kushner has been operating in his various White House capacities under a temporary security clearance. He has not been able to wrangle a permanent security clearance even now, more than a year after his father-in-law’s inauguration.

THEN ALONG CAME ROB PORTER’S EX-WIVES

Kushner’s lack of security clearance came back into public awareness with the scandal involving Rob Porter.

Porter was a White House staff secretary and served at a high level in the White House.  He only had a temporary security clearance. But that was not common knowledge to the public. Nor was the why.  Until recently.

A few weeks ago, it became public knowledge that two of Porter’s ex-wives and one girlfriend have accused him of domestic abuse. A court granted a personal protective order against him.  The allegations were credible.  And known to the White House, in one form or another, since fairly early on in the administration.

The FBI discovered the information, and that Porter was clearly trying to hide it, as part of its background check for Rob Porter’s security clearance. And that background is why he did not get a permanent clearance.  When the news of the allegations against him, complete with graphic photos, became public, the White House was forced to let Porter go.

In the process, the fact that many others in the White House likewise had not managed to obtain permanent security clearances also bubbled up in the news. Kushner’s situation floated to the very top.

Meanwhile, Chief of Staff John Kelly came under fire for not acting sooner on the Rob Porter matter.  Whispers again circulated that President Trump was looking to replace Kelly. In an effort to make it appear that everything was under control, last Friday, February 16, 2018, Kelly issued a memo meant to overhaul the White House’s many issues with obtaining permanent security clearances for White House staff.

Accordingly, I am directing the following actions be carefully considered and implemented as appropriate:

Effective one week from today [i.e., February 23, 2018], discontinue any Top Secret or SCI-level interim clearances for individuals whose investigations or adjudications have been pending since June 1, 2017 or before.

WHAT THE WHITE HOUSE NOW SAYS ABOUT KUSHNER’S CLEARANCE

Kushner’s lawyer declined to comment on whether it was likely Kushner could wrangle a permanent security clearance by Friday. And given how long it’s taken so far, it doesn’t look like it will happen.

Of the memo’s looming deadline, Kushner’s attorney said, “the new policy announced by Mr. Kelly will not affect Mr. Kushner’s ability to continue to do the very important work he has been assigned by the president.”

Press Secretary Sanders says the same.  “I can tell you that no decision within the memo will impact anything that Jared Kushner is working on… He will continue to do the important work that he has been focused on with the last year.”

So does even Chief of Staff Kelly.  Despite his Friday directive, on Tuesday, Kelly expressed his confidence that Kushner would be able to “continue performing his duties in his foreign policy portfolio including overseeing our Israeli-Palestinian peace effort and serving as an integral part of our relationship with Mexico. Everyone in the White House is grateful for these valuable contributions to furthering the President’s agenda. There is no truth to any suggestion otherwise.” 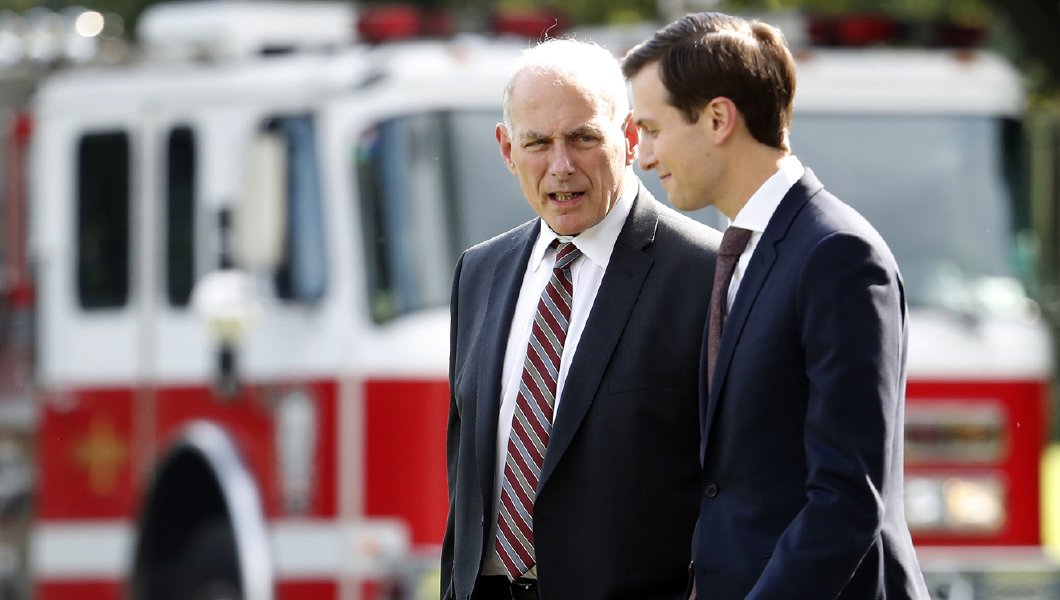 No one has ever bothered to lay out what Kushner’s “duties” to the White House are exactly. Or what Kushner is “working on” for the White House.  What little has been specified seems to relate to high level foreign negotiations. Recent report indicate Kushner also reads the President’s daily security briefing. Apparently, that is another of his many duties.

And that’s just part of the problem with this whole fiasco. A big part, but still only part.

CHAOS IN THE WHITE HOUSE?

This whole scenario revealed a couple of other things too.  First is that the stories of a chaotically run White House are accurate.

Kelly’s Friday night memo was not released publicly until after Trump had left Washington for a weekend at Mar-a-Lago, Florida.  Most likely in a deliberate attempt to go behind the backs of the President and some of his staff. To present a fait accompli.  Given the lack of a White House response on this issue over the weekend, it appears to have worked.

But that left everyone scrambling to defend Jared and his job come Tuesday.  So, Kelly’s stratagem just makes it evident that there is limited communication between various members of the White House staff. And that they often work contrary to each other, either by design or by accident. And I don’t know which is worse.

EROSION OF MORE CHECKS AND BALANCES

I have written in other blogs that I thought various checks and controls in our government have been eroding to a dangerous degree.  This White House response serves as one more example.  Although not quite the way I had expected.

I had expected that the President would just fiat Kushner’s security clearance in response to Kelly’s memo. I am not sure he has the power, but he is the ultimate decider of what is considered classified or not.  So, I would not be surprised to find he could simply grant Kushner a permanent security clearance. Or if not, just quietly de-classify information for his use.

I expected that if the President were able to simply grant the clearance he, or his staff, might be clever enough to do it without fanfare. Let this Friday’s deadline come and go, and later, when the question would come up, the press would be informed, “Jared? No, he has had a permanent security clearance for a while now.”

That would still have been an erosion of the checks on the system. A waiving of security requirements to anyone on the President’s whim.  But what the White House is currently signaling is a far worse erosion.

Because now the White House is telling us it doesn’t even care if it goes through the motions. Clearance?  We don’t need no stinking clearance.

Rather than using the power of the Executive to just grant a security clearance, the White House has essentially announced that it will just ignore the need for a security clearance entirely.  And another check designed to protect American democracy and people gets thrown completely out the window.

And once again, there is not a thing to be done about it.  Because there is no means of enforcing these checks upon the President if he doesn’t want to deal with them.  Just remember, what one President does, others will continue to do.

So, sleep well tonight America, knowing that security clearance or not, Jared Kushner will stay on the job. Whatever that job may be.