Owl Facts: Fixed Eyes Give Us a Range of Emotion

An owl’s intense gaze feels like it sees into the depths of your soul. Yet humans also end up reading into owl eyes a range of other expressions. Let’s take a closer look at the magnificent Strigiformes’ orbs.

Except, they are not quite orbs. Owls, like many birds, have very large eyes, but an owl’s eyes are not spheres.  People often describe them as tubes. 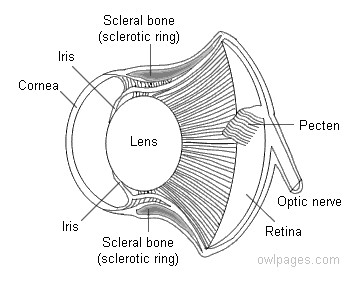 Cross section of an owl’s eye

(Yes, my day-job continues to demand much of my time this week, so I have dipped into another nature interlude.)

Owls eyes come in a more than one color, usually either a yellow/orange iris or a dark one. 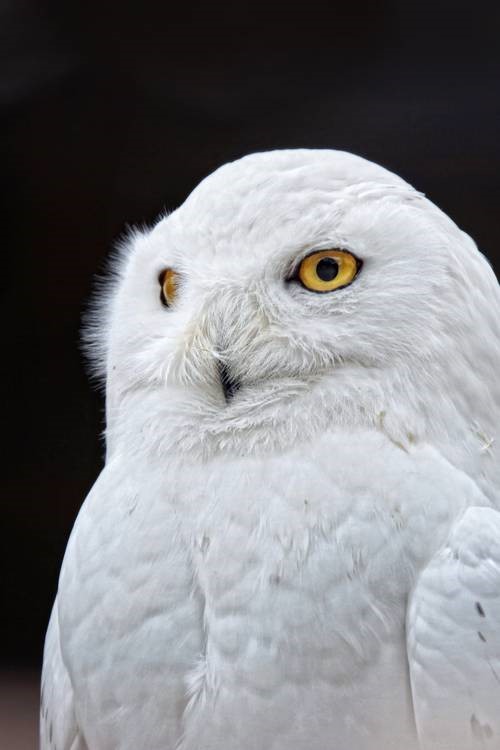 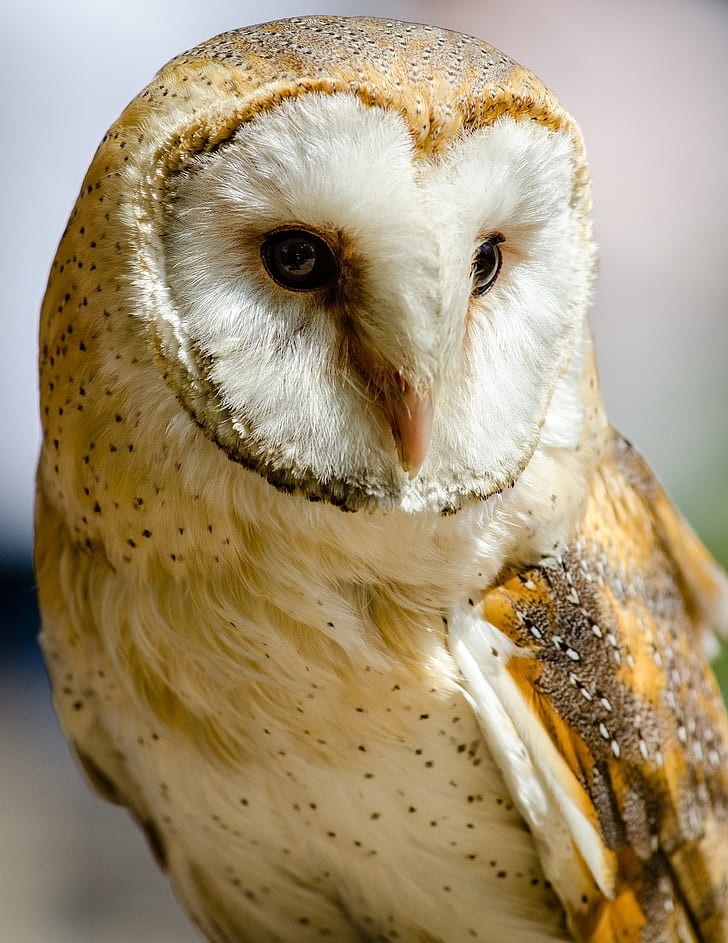 The owl’s eyes offer the bird advantages in low light. The eyes’ size allows them to efficiently collect and process light. The distinctively large pupils also allow more of the light to reach the retina. In addition, the owl’s retina has a lot of rod cells. Between rods and cones, the rod cells are sensitive to light and movement but do not fare as well recognizing color. The owl trades seeing in technicolor for excellent night vision.

Someone in one of my writing groups once wrote a story in which the main character had been transformed into an owl. The author asserted many misconceptions about owls, including the assumption that good night vision meant poor day vision with sensitivity to light.  One might assume that, with so many light sensitive rod cells, an owl’s vision would be overwhelmed and blinded in bright light. However, thanks to highly adjustable pupils, owls get along in daylight just fine. Some species even see better than humans in the sunlit hours. 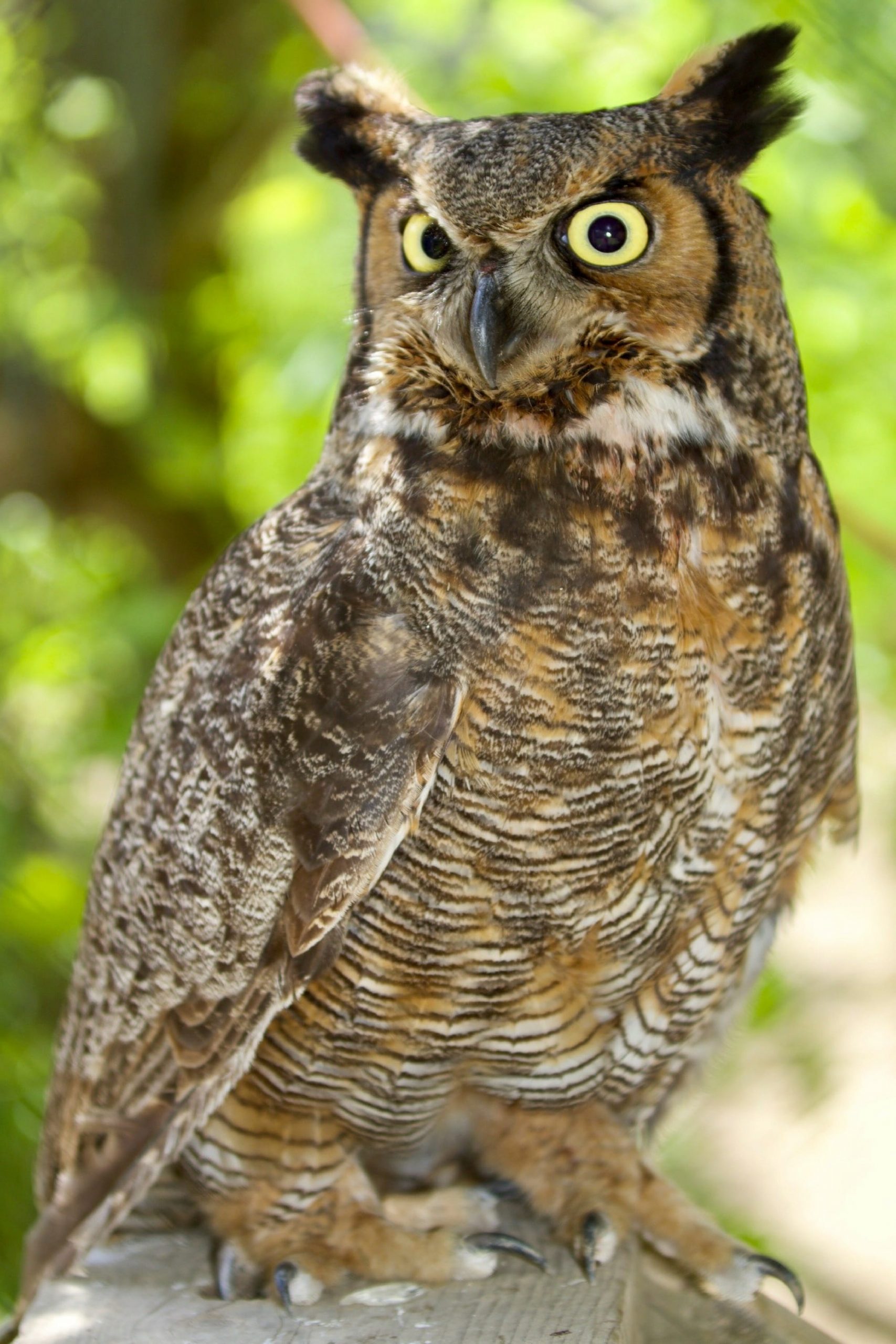 Which brings us to that fixed, penetrating owl gaze. The owl, like most predators, has eyes oriented forward instead of more to the side, like a prey animal. This too is a trade-off. 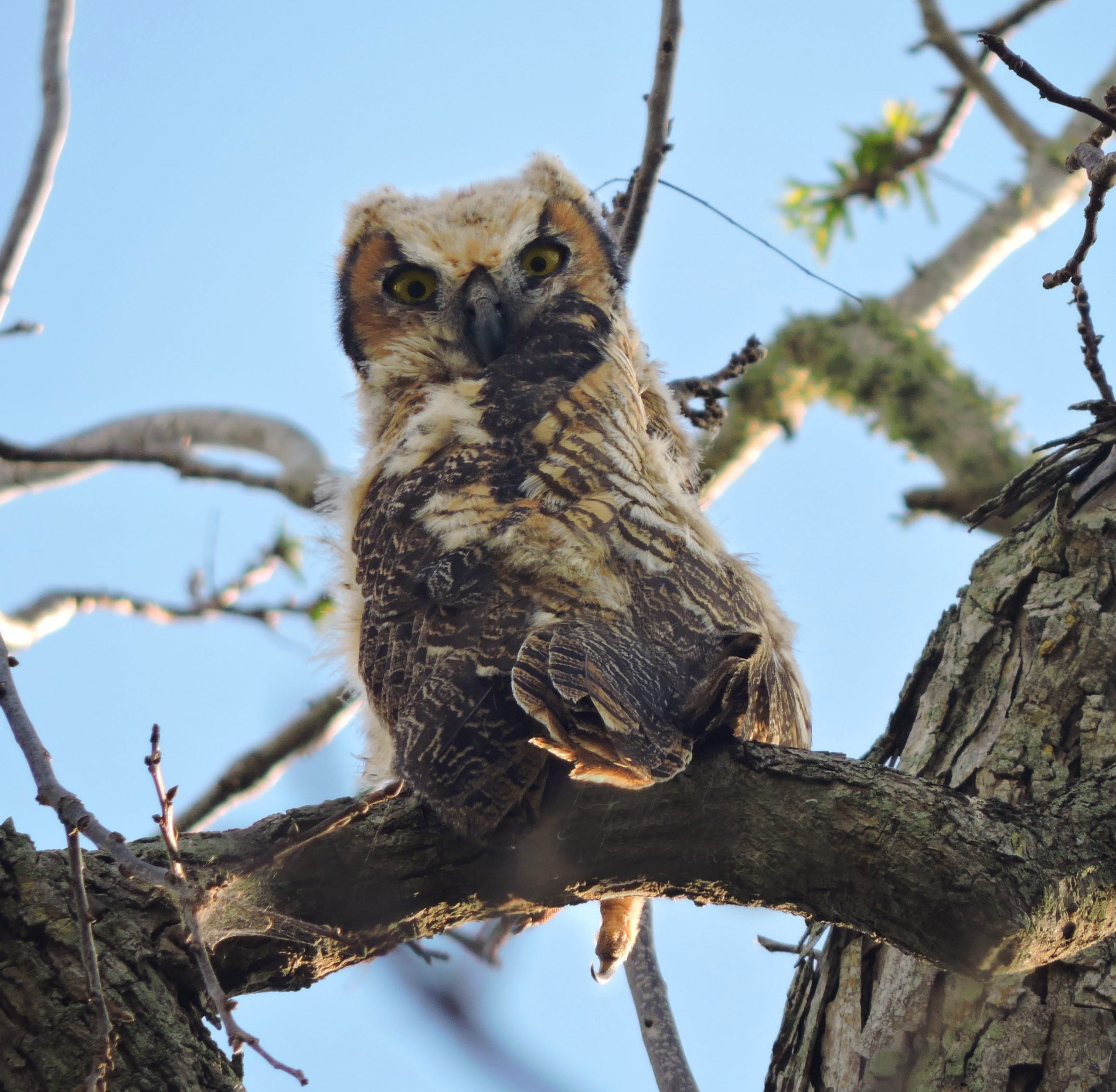 Not yet a grown-up, and still this bird has the stare.

A prey animal, like a deer, needs to have a wide range of vision, so that it can avoid becoming lunch. A predator needs to find lunch, and that means depth perception, which it gets through binocular vision. When the fields of vision for both eyes overlap, it allows the signals from those eyes to be used to triangulate and better determine the height, width, and depth dimensions of what they see. Pretty important factors when trying to catch a meal.

Unlike other birds of prey, the owl’s eyes rest in a forward oriented facial disk. This helps give owls an appearance which humans find analogous to their own features. In turn, this helps gives rise to the tendency to see human and other expressions in owl faces. 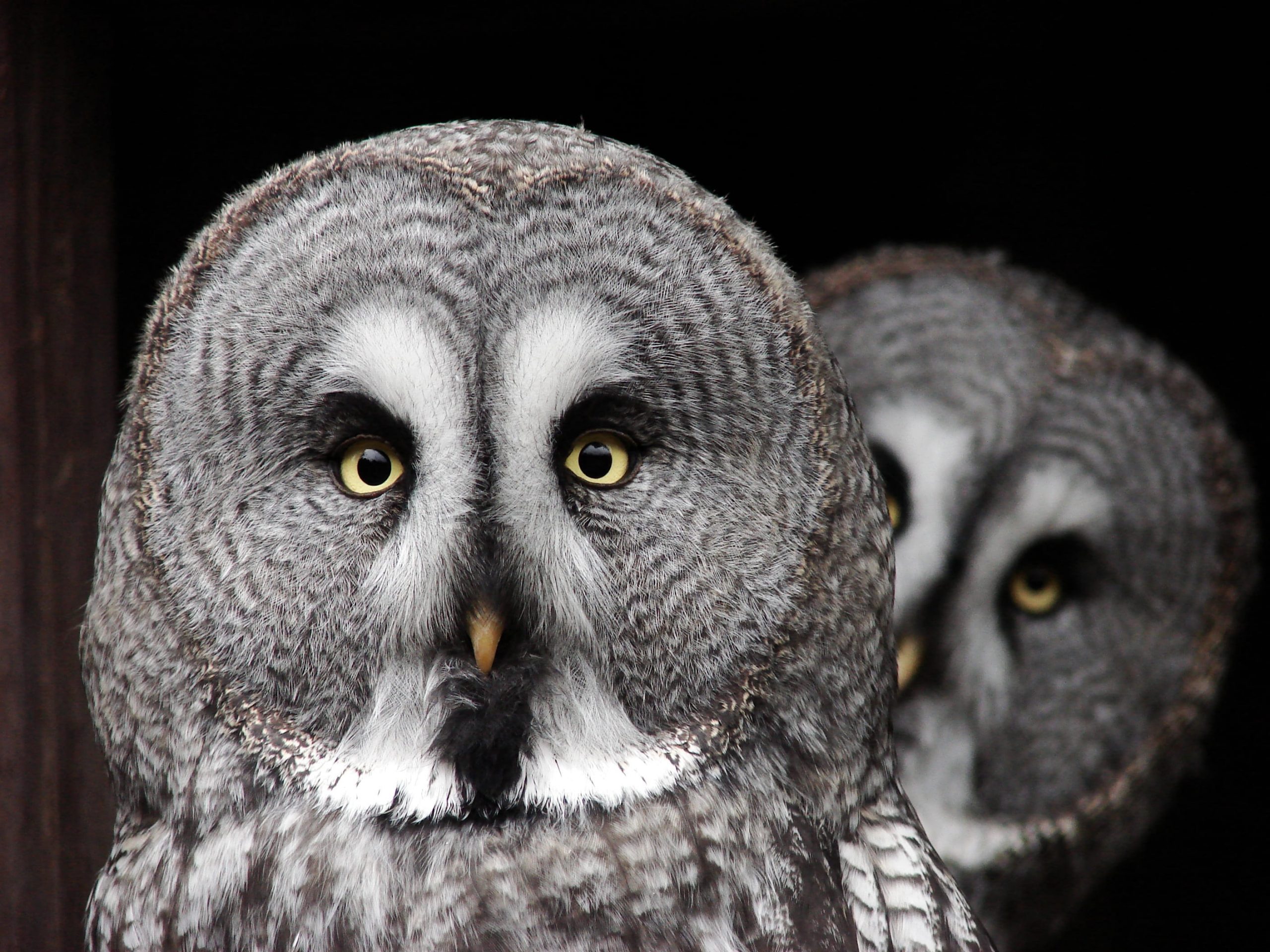 Other birds of prey lack that facial disk and the related sense of familiarity to the human eye. They also have prominent brow ridges to protect their eyes, which makes sense for such an important tool in a bird’s hunting arsenal.  While owls clearly have some sort of brow ridge as well, the fluff of feathers around them and their facial disks leave the impression of something akin to a human’s brow and forehead. In contrast, most other birds of prey just look prepetually angry to us. Their gaze remains penetrating and fierce, but humans refrain from adding the variety of interpretations to them like they do to owls. 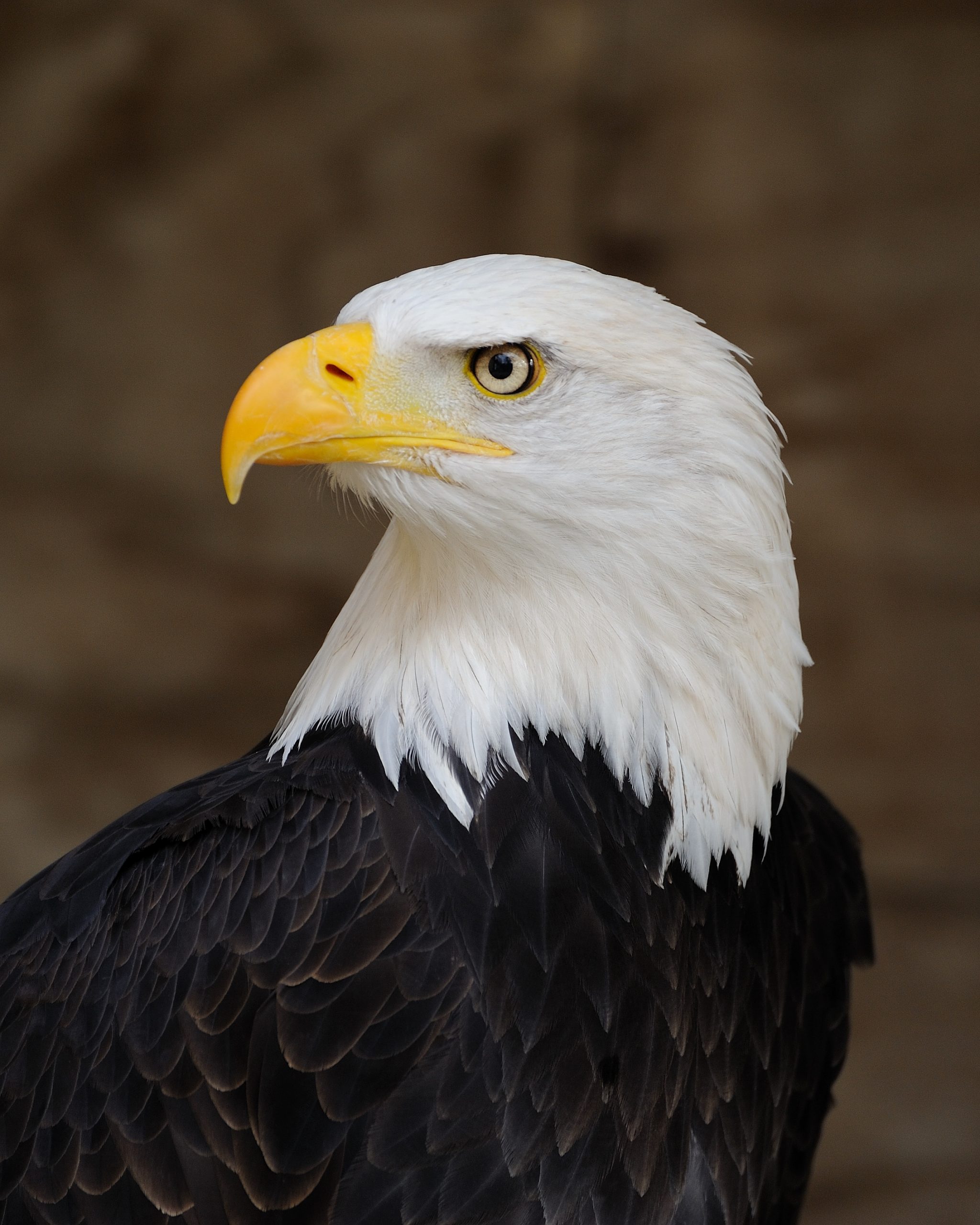 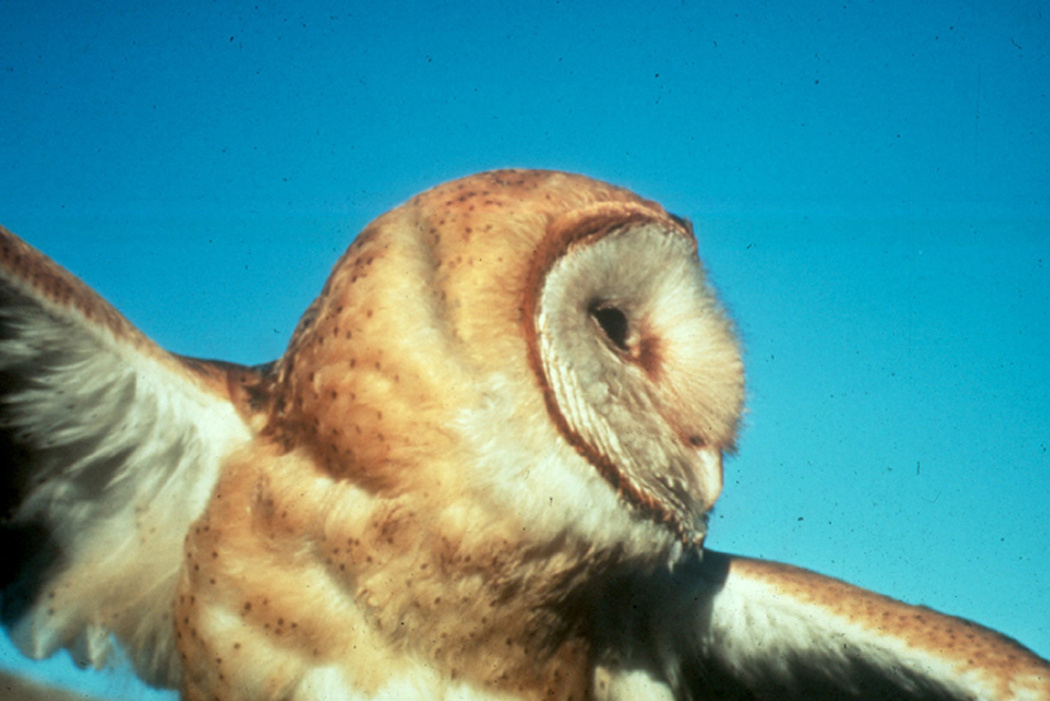 Boney structures, called sclerotic rings, hold the owl’s eyes in place. In contrast, the optic nerve and a series of muscles keep human eyes in place. The owl’s less flexible system of securing the eye means the owl cannot really move its eyes. Hey, no eyerolling. For an owl, that is. Chances are you will never see the whites of an owl’s eyes, just the irises and dark pupils. Staring at you intently. Because their eyes are literally fixed in place.

Owls get around that by having freaky necks. They can rotate their heads about 270 degrees. They can also tilt theirs at extreme angles, including almost upside down. It ups the ante quite a bit on the dog’s head tilt of curiosity. That comes in handy as it turns out, because of another feature I plan to get into in another blog. Let me put it this way – as good as their night vision may be, it is not the owl’s main tool in their hunting arsenal, day or night. 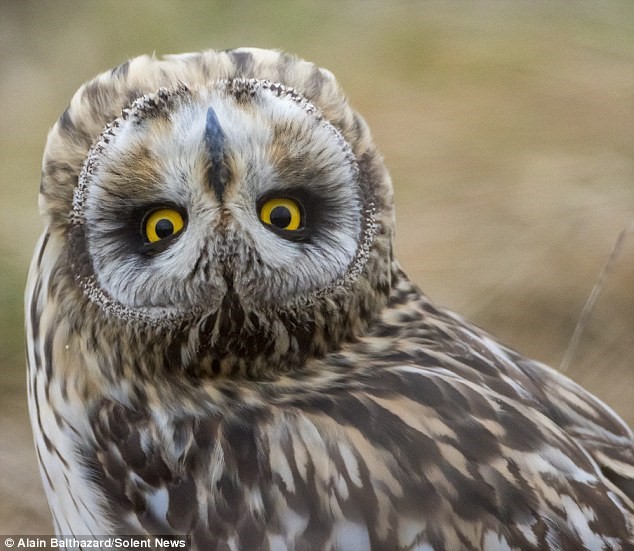 The ability to cock its head and turn it at odd angles helps diffuse the intensity of the owl’s gaze as compared to other birds of prey. Although, once again, the key factor here is the facial disk. Other birds’ heads have a very full range of motion as well, as the photo of the eagle above demonstrates. But they do not have that facial disk to add a layer of familiarity to human perception.

The owl, like some other birds of prey, also has multiple eyelids. The upper eyelid, covered in feathers, closes like ours does when it blinks. And owls can and do blink their eyes independently, another feature that lends itself to our reading human expression into owl faces.

The feathers around that upper lid further adds to the illusion because they look like eyelashes.  The owl’s lower eyelid closes with the upper when the bird is asleep, and the look tends to make us think of a crinkly-eyed expression of happiness. 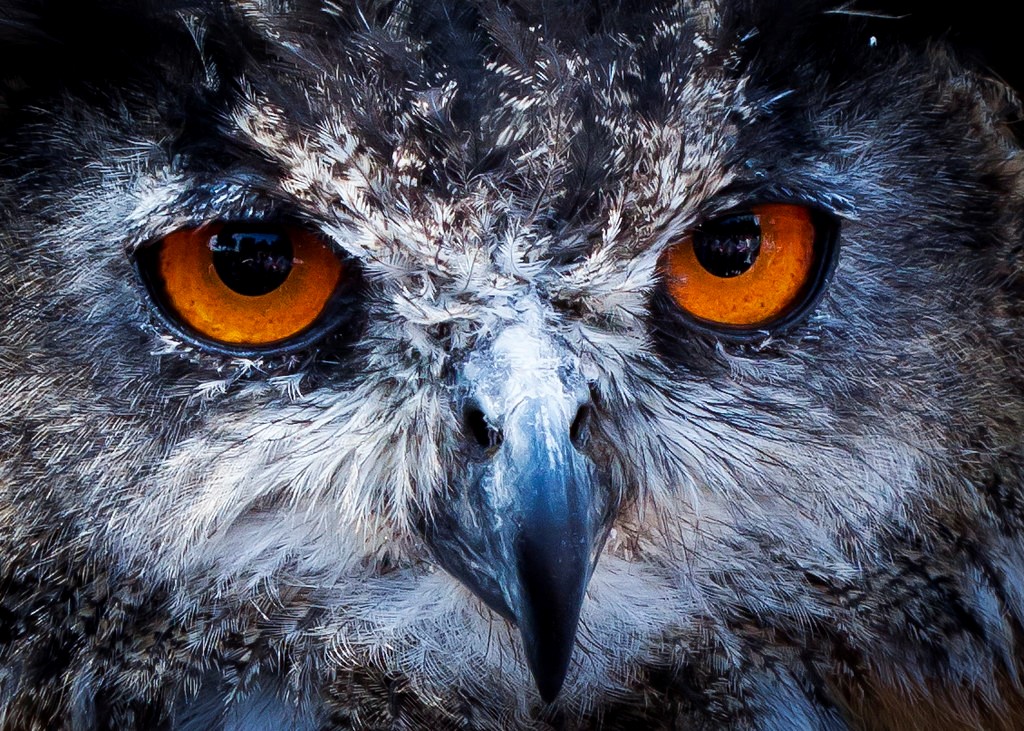 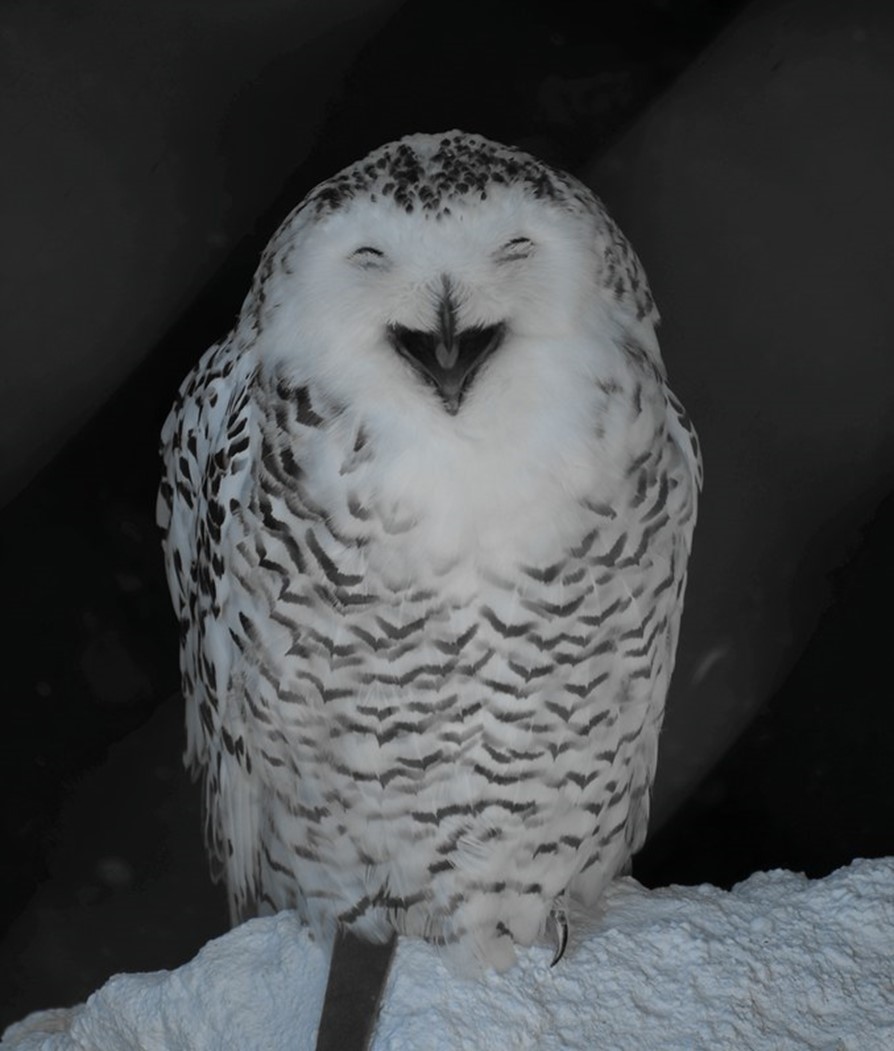 The owl’s third eyelid, called a nictitating membrane, shuts diagonally across the eye to clean and protect the eye surface. Due to its transparency, the lid does not interrupt an owl’s vision when it slides across. Other birds also have this kind of eyelid, a useful feature to have for such an important organ.

That third eyelid’s diagonal movement across eyes fixed in place heightens our sense of intensity in the bird’s stare. If an owl does not move its head, its gaze remains locked on one point without the need for anything humans recognize as a normal blink to signal the end of the staring contest. 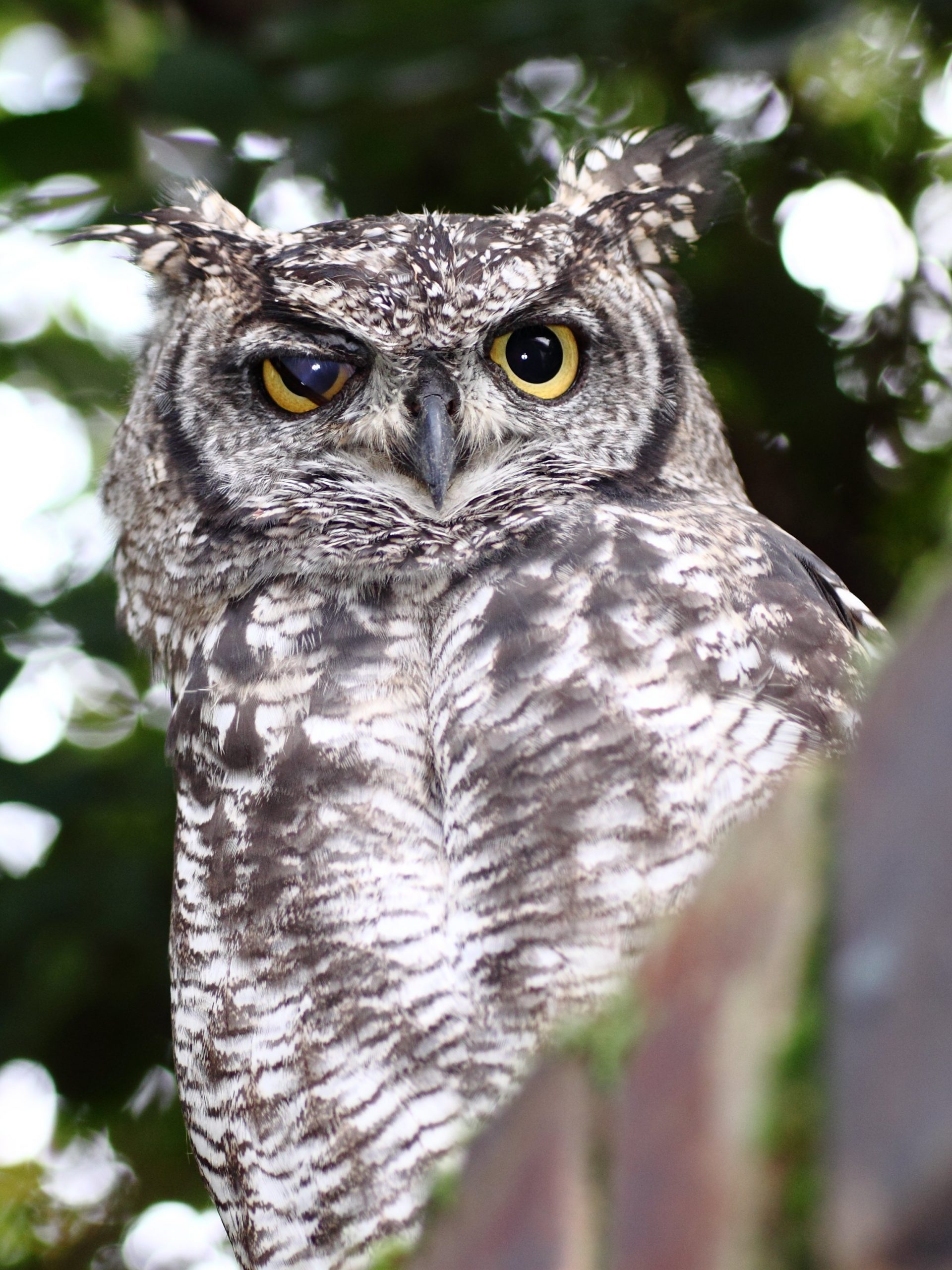 As you can see, like with the other eyelids, the owl’s nictitating membrane can blink independently.

Owls have incredible adaptations, including eye configuration, range of neck movement, and multiple eyelids that make their eyes useful but also intimidating. At the same time, they have some features, that, when combined, had led humans to interpret a range expressions from the unnatural to the human to the downright comical, all from owls just looking out at the world normally. All of which gives me more excuses to add more photos of owls to this blog. 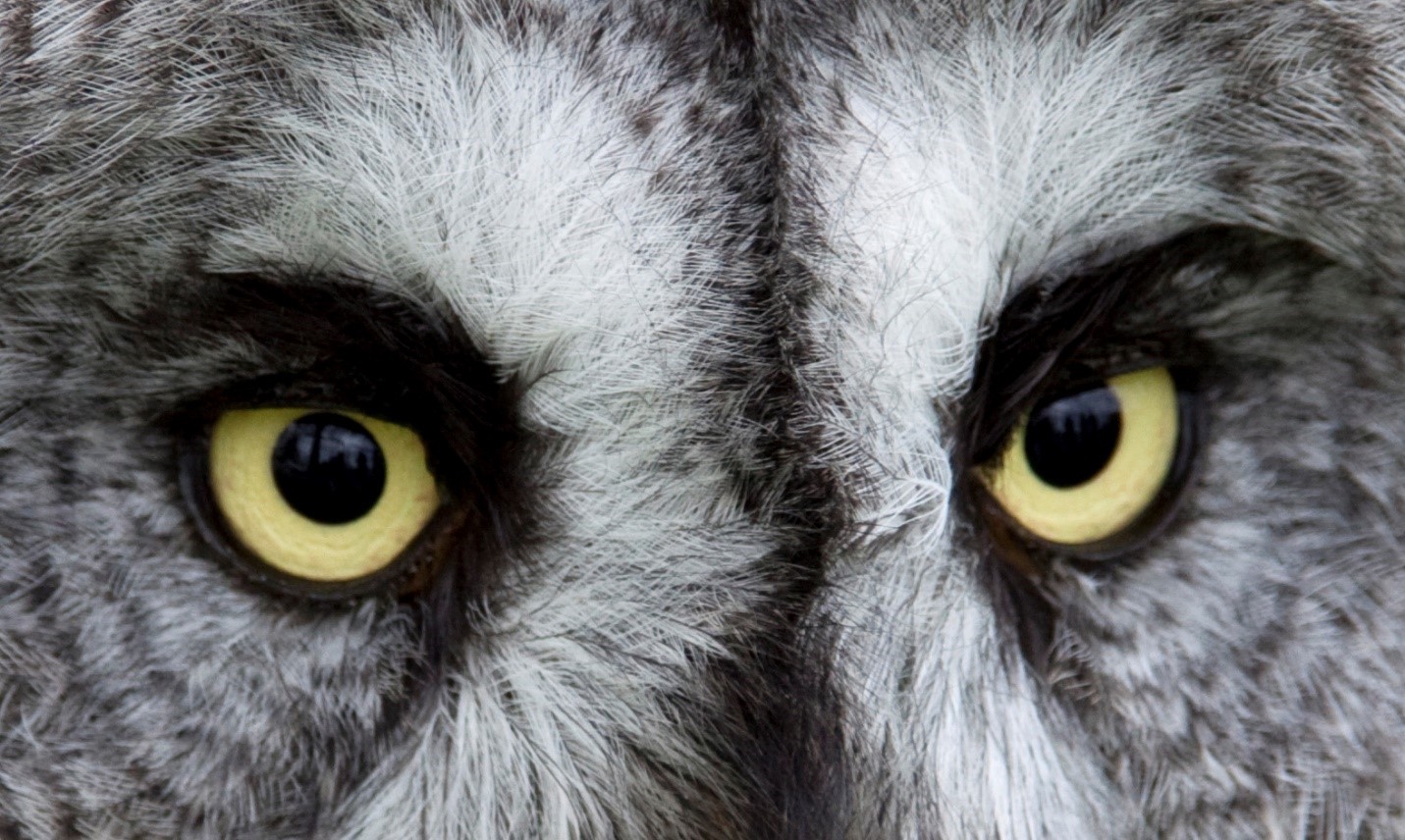 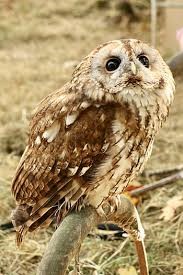 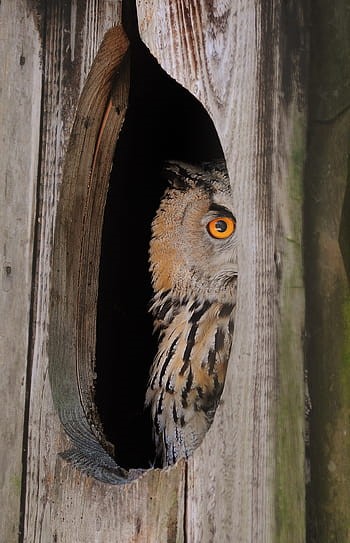 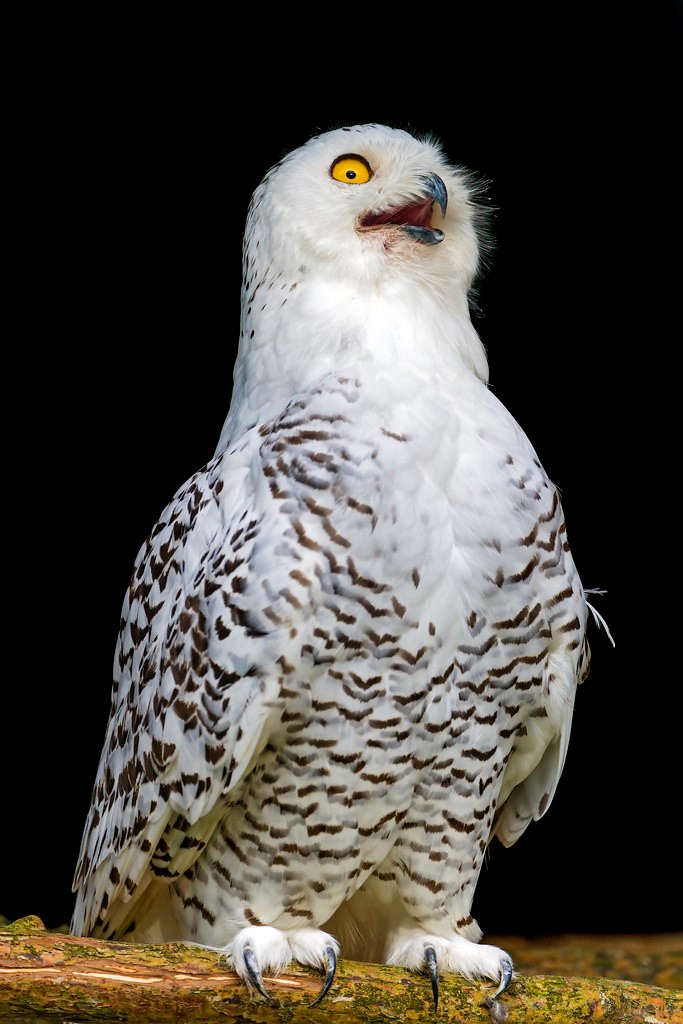 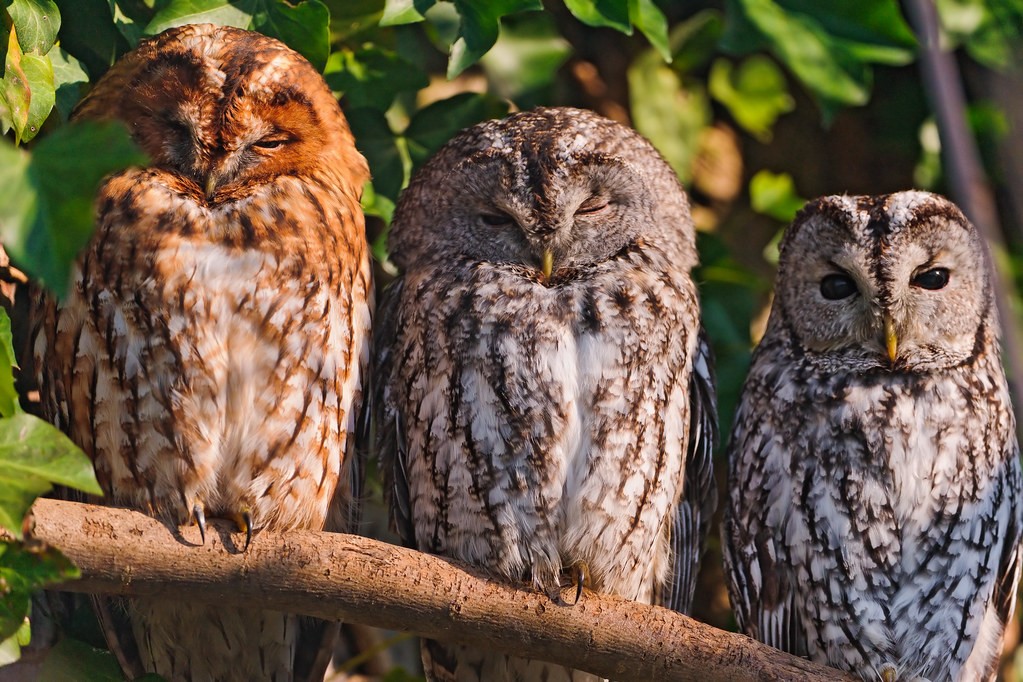 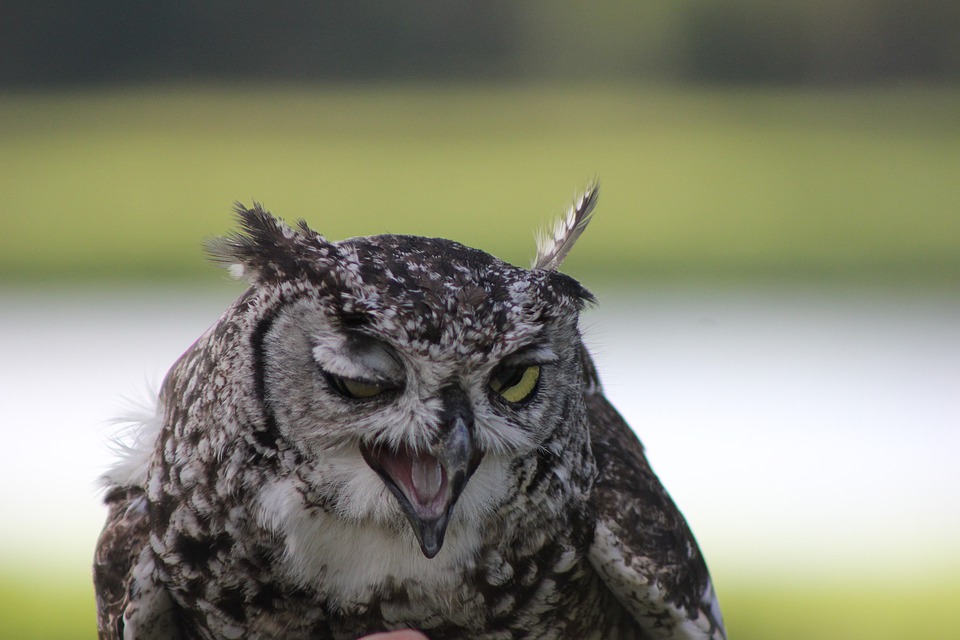