When in the Course of Human Events . . .

It’s the Fourth of July, Independence Day. It commemorates the adoption of the Declaration of Independence in 1776.

It is not really about flags. The forerunner of the one we wave today was not adopted until a year after the Declaration. And there’s a Flag Day for the flag.

It is not really about grilling and fireworks. We get plenty of both all summer.

It’s not about Sousa marches, but he was good at them, wasn’t he?

It is not even really about honoring those who serve/served in the armed services. We have Veterans Day, Memorial Day, and Armed Forces Day, too.

But even if today is not about any of those things, you can get into any or all of them in celebration of today, if you want to. Because it is “a free country.” And that is what this really is all about.

So celebrate how you will. Honor those you will. Remember others are allowed to do the same. It’s all good.

But while you are celebrating, please consider taking some time to contemplate the principles that form the basis of the Declaration of Independence and the Constitution, including the protection of our freedoms. It’s not just about being grateful. It’s about knowing what those freedoms mean and supporting those freedoms in the present day.

TEXT OF THE INTRODUCTION AND PREAMBLE TO THE DECLARATION OF INDEPENDENCE

When in the Course of human events, it becomes necessary for one people to dissolve the political bands which have connected them with another, and to assume among the powers of the earth, the separate and equal station to which the Laws of Nature and  of Nature’s God entitle them, a decent respect to the opinions of mankind requires that they should declare the causes which impel them to the separation.

We hold these truths to be self-evident, that all men are created equal, that they are endowed by their Creator with certain unalienable Rights, that among these are Life, Liberty and the pursuit of Happiness.

That to secure these rights, Governments are instituted among Men, deriving their just powers from the consent of the governed, That whenever any Form of Government becomes destructive of these ends, it is the Right of the People to alter or to abolish it, and to institute new Government, laying its foundation on such principles and organizing its powers in such form, as to them shall seem most likely to effect their Safety and Happiness. Prudence, indeed, will dictate that Governments long established should not be changed for light and transient causes; and accordingly all experience hath shewn, that mankind are more disposed to suffer, while evils are sufferable, than to right themselves by abolishing the forms to which they are accustomed. But when a long train of abuses and usurpations, pursuing invariably the same Object evinces a design to reduce them under absolute Despotism, it is their right, it is their duty, to throw off such Government, and to provide new Guards for their future security. 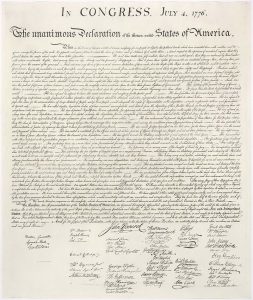